This article provides a high level overview of the XRP Ledger, the information it stores, and how transactions result in changes to the ledger.

When building applications on the XRP Ledger, it is important to understand this process, so as not to be surprised by the behavior of XRP Ledger APIs and their effects.

The peer-to-peer XRP Ledger network provides a worldwide, shared ledger, which gives applications authoritative information about the state of its contents. This state information includes:

For a full, technical description of which data is included in a ledger version, see the Ledger Format Reference.

The set of transactions included in a ledger instance are recorded in that ledger and allow audits of the XRP Ledger history. If an account balance is different in ledger N+1 than it was in ledger N, then ledger N+1 contains the transaction(s) responsible for the change.

All transactions included in a ledger destroy some XRP as a transaction cost, regardless of whether they had a tes or tec code. The exact amount of XRP to destroy is defined by the signed transaction instructions.

In addition to the tes and tec class result codes, there are ter, tef and tem class codes. The latter three indicate provisional failures returned by API calls. Only tes and tec codes appear in ledgers. Transactions that are not included in ledgers cannot have any effect on the ledger state (including XRP balances), but transitions that provisionally failed may still end up succeeding. 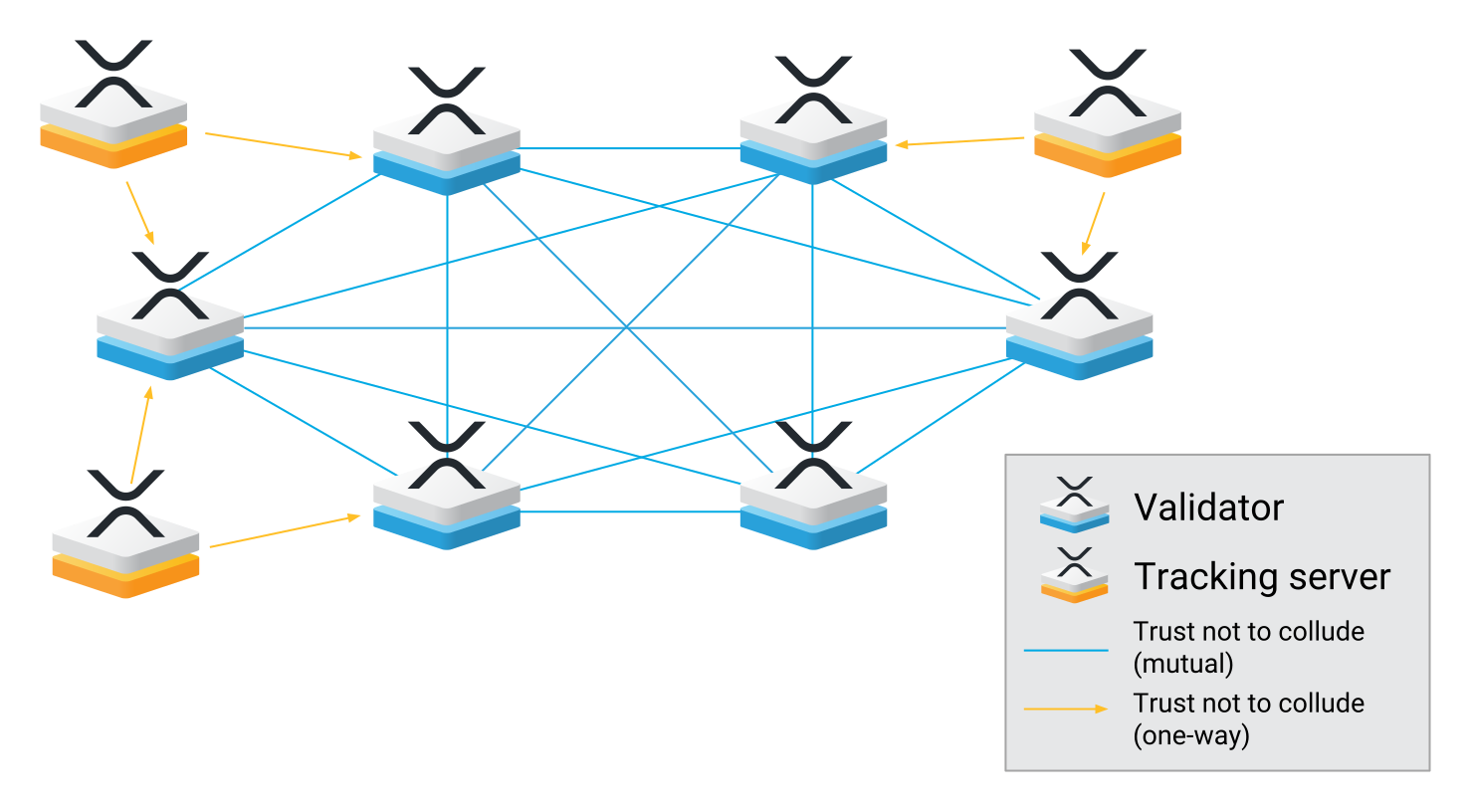 During consensus, each server evaluates proposals from a specific set of servers, known as that server's trusted validators, or Unique Node List (UNL).5 Trusted validators represent a subset of the network which, when taken collectively, is "trusted" not to collude in an attempt to defraud the server evaluating the proposals. This definition of "trust" does not require that each individual chosen validator is trusted. Rather, validators are chosen based on the expectation they will not collude in a coordinated effort to falsify data relayed to the network 6.

Figure 5: Validators Propose and Revise Transaction Sets — At the start of consensus, validators may have different sets of transactions. In later rounds, servers modify their proposals to match what their trusted validators proposed. This process determines which transactions they should apply to the ledger version currently being discussed, and which they should postpone for later ledger versions.

Validation is the second stage of the overall consensus process, which verifies that the servers got the same results and declares a ledger version final. In rare cases, the first stage of consensus can fail; validation provides a confirmation afterward so that servers can recognize this and act accordingly.

Validation can be broken up into roughly two parts:

When the consensus process completes, each server independently computes a new ledger from the agreed-upon set of transactions. Each server calculates the results by following the same rules, which can be summarized as follows:

Validators each relay their results in the form of a signed message containing the hash of the ledger version they calculated. These messages, called validations, allow each server to compare the ledger it computed with those of its peers.

Figure 8: Ledger is Validated When Supermajority of Peers Calculate the Same Result — Each server compares its calculated ledger with the hashes received from its chosen validators. If not in agreement, the server must recalculate or retrieve the correct ledger.

Servers in the network recognize a ledger instance as validated when a supermajority of the peers have signed and broadcast the same validation hash 7. Going forward, transactions are applied to this updated and now validated ledger with ledger index N+1.

If the network fails to achieve supermajority agreement on validations, this implies that transaction volume was too high or network latency too great for the consensus process to produce consistent proposals. In this case, the servers repeat the consensus process. As time passes since consensus began, it becomes increasingly likely that a majority of the servers have received the same set of candidate transactions, as each consensus round reduces disagreement. The XRP Ledger dynamically adjusts transaction costs and the time to wait for consensus in response to these conditions.

Once they reach supermajority agreement on validations, the servers work with the new validated ledger, ledger index N+1. The consensus and validation process repeats 9, considering candidate transactions that were not included in the last round along with new transactions submitted in the meantime.

Transactions submitted to the XRP Ledger are not processed instantaneously. For a period of time, each transaction remains a candidate.

The lifecycle of a single transaction is as follows:

1 – Transactions with tec result codes do not perform the requested action, but do have effects on the ledger. To prevent abuse of the network and to pay for the cost of distributing the transaction, they destroy the XRP transaction cost. To not block other transactions submitted by the same sender around the same time, they increment the sending account's sequence number. Transactions with tec-class results sometimes also perform maintenance such as deleting expired objects or unfunded trade offers.

2 – For example, consider a scenario where Alice has $100, and sends all of it to Bob. If an application first submits that payment transaction, then immediately after checks Alice’s balance, the API returns $0. This value is based on the provisional result of a candidate transaction. There are circumstances in which the payment fails and Alice’s balance remains $100 (or, due to other transactions, become some other amount). The only way to know with certainty that Alice’s payment to Bob succeeded is to check the status of the transaction until it is both in a validated ledger and has result code tesSUCCESS. If the transaction is in a validated ledger with any other result code, the payment has failed.

3 – Strictly speaking, validators are a subset of tracking servers. They provide the same features and additionally send "validation" messages. Tracking servers may be further categorized by whether they keep full vs. partial ledger history.

4 – Transactions fail to pass a round of consensus when the percentage of peers recognizing the transaction falls below a threshold. Each round is an iterative process. At the start of the first round, at least 50% of peers must agree. The final threshold for a consensus round is 80% agreement. These specific values are subject to change

5 – Each server defines its own trusted validators, but the consistency of the network depends on different servers choosing lists that have a high degree of overlap. For this reason, Ripple publishes a list of recommended validators.

7 – The supermajority threshold, as of November 2014, requires that at least 80% of peers must agree for a ledger to be validated. This happens to be the same percentage required by a round of consensus. Both thresholds are subject to change and need not be equal.

8 – In practice, the server detects that it is in the minority before receiving validations from all peers. It knows when it receives non-matching validations from over 20% of peers that its validation cannot meet the 80% threshold. At that point, it can begin to recalculate a ledger.

9 – In practice, the XRP Ledger runs more efficiently by starting a new round of consensus concurrently, before validation has completed.

10 – A rippled server can respond to API requests even without a complete ledger history. Interruptions in service or network connectivity can lead to missing ledgers, or gaps, in the server’s ledger history. Over time, if configured to, rippled fills in gaps in its history. When testing for missing transactions, it is important to verify against a server with continuous complete ledgers from the time the transaction was submitted until its LastLedgerSequence. Use the server_info method to determine which ledgers are available to a particular server.