The Checks feature in the XRP Ledger allows users to create deferred payments that can be canceled or cashed by the intended recipients. Like personal paper checks, XRP Ledger Checks start with the sender of the funds creating a Check that specifies an amount and receiver. The receiver cashes the check to pull the funds from the sender's account into the receiver's account. No money moves until the receiver cashes the Check. Because funds are not put on hold when the Check is created, cashing a Check can fail if the sender doesn't have enough funds when the receiver tries to cash it, just like traditional checks. If there's a failure cashing the check, the sender can retry until the check expires.

XRP Ledger Checks have expiration times after which they may no longer be cashed. If the receiver doesn't successfully cash the Check before it expires, the Check object remains in the XRP Ledger until someone cancels it. Anyone may cancel the Check after it expires. Only the sender and receiver can cancel the Check before it expires or is cashed. The Check object is removed from the Ledger when the sender successfully cashes the check or someone cancels it.

Checks are similar to Escrow and Payment Channels, but there are some important differences between those features and Checks:

XRP Ledger Checks also solve a problem that is unique to the XRP Ledger: they allow users to reject unwanted payments or accept only a portion of a payment. This is useful for institutions that need to be careful about accepting payments for compliance reasons.

Checks potentially enable many other use cases. Ripple encourages the community to find new and creative applications for Checks.

Problem: To comply with regulations like BSA, KYC, AML, and CFT, financial institutions must provide documentation about the source of funds they receive. Such regulations seek to prevent the illicit transfer of funds by requiring institutions to disclose the source and destination of all payments processed by the institution. Because of the nature of the XRP Ledger, anyone could potentially send XRP (and, under the right circumstances, issued currencies) to an institution's account on the XRP Ledger. Dealing with such unwanted payments adds significant cost and time delays to these institutions' compliance departments, including potential fines or penalties.

Checks typically have the lifecycle described below. 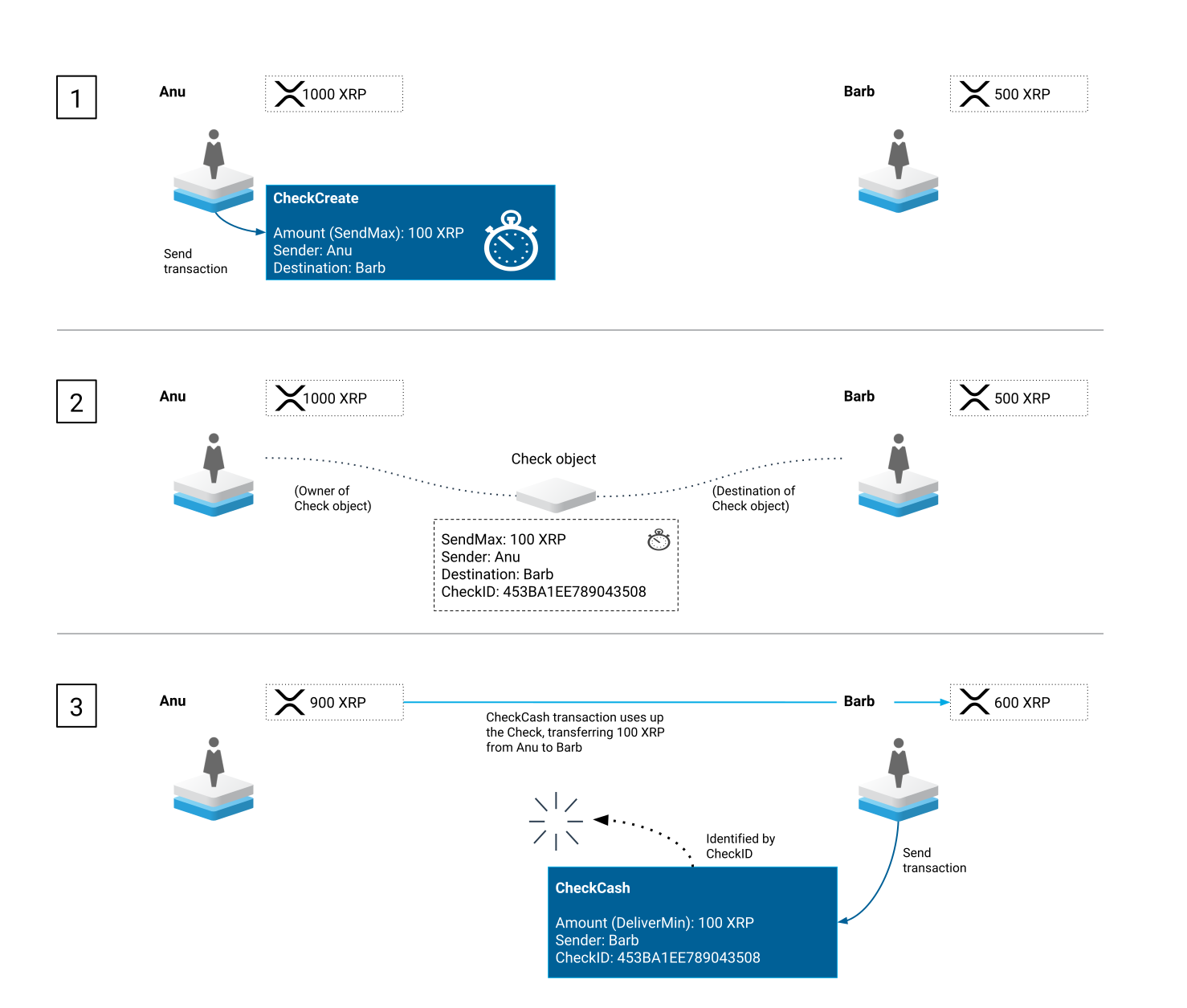 Step 1: To create a Check, the sender submits a CheckCreate transaction and specifies the receiver (Destination), expiration time (Expiration), and maximum amount that may be debited from the sender's account (SendMax).

Step 3: To cash the check, the receiver submits a CheckCash transaction. The receiver has two options for cashing the check:

If the sender has enough funds to cover the Check and the expiration time has not passed, the funds are debited from the sender's account and credited to the receiver's account, and the Check object is is destroyed.

In the case of expirations, Checks have the lifecycle described below. 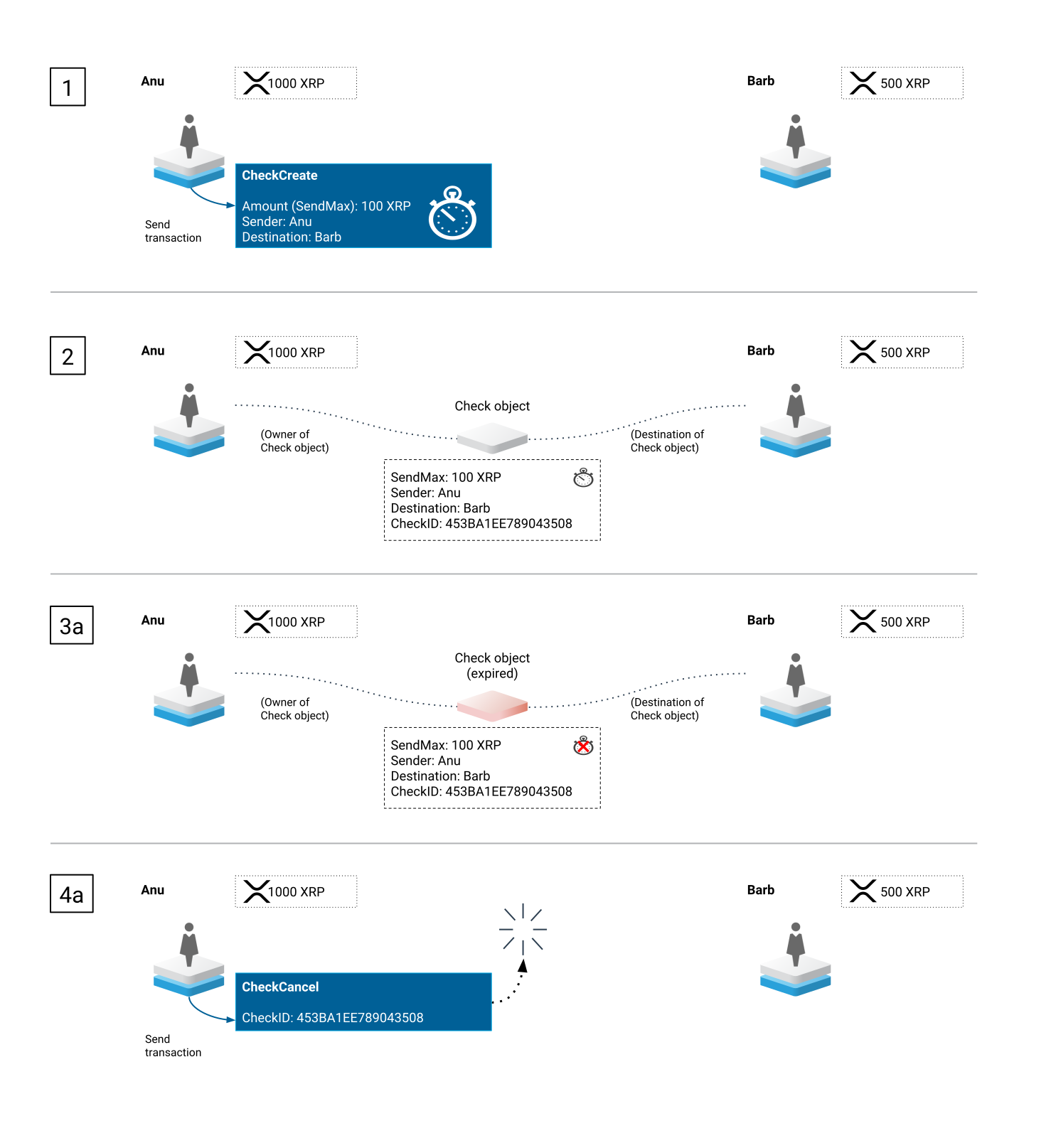 All Checks start the same way, so Steps 1 and 2 are the same.

Step 3a: If the Check expires before the receiver can cash it, the Check can no longer be cashed but remains in the ledger.

Step 4a: After a Check expires, anyone may cancel it by submitting a CheckCancel transaction. That transaction removes the Check from the ledger.

Checks require rippled v0.90.0 or later. As of 2018-10-11, the Checks amendment has not yet been enabled on the production XRP Ledger. For the latest status of all known amendments, see Known Amendments. For more information about how amendments are enabled and voted on, see Amendment Process.

To check the status of an amendment on a test net or private XRP Ledger network, use the feature method.

For more information about Checks in the XRP Ledger, see: