The online deletion feature lets the rippled server delete the server's local copy of old ledger versions to keep disk usage from rapidly growing over time. The default config file sets online deletion to run automatically, but online deletion can also be configured to run only when prompted.

The server always keeps the complete current state of the ledger, with all the balances and settings it contains. The deleted data includes older transactions and versions of the ledger state that are older than the stored history.

The default config file sets the rippled server to keep the most recent 2000 ledger versions and automatically delete older data.

Tip: Even with online deletion, the amount of disk space required to store the same time span's worth of ledger data increases over time, because the size of individual ledger versions tends to grow over time. This growth is very slow in comparison to the accumulation of data that occurs without deleting old ledgers. For more information on disk space needs, see Capacity Planning.

The rippled server stores ledger history in its ledger store. This data accumulates over time.

Inside the ledger store, ledger data is "de-duplicated". In other words, data that doesn't change from version to version is only stored once. The records themselves in the ledger store do not indicate which ledger version(s) contain them; part of the work of online deletion is identifying which records are only used by outdated ledger versions. This process is time consuming and affects the disk I/O and application cache, so it is not feasible to delete old data on every ledger close.

The online deletion settings configure how many ledger versions the rippled server should keep available in the ledger store at a time. However, the specified number is a guideline, not a hard rule:

With online deletion enabled and running automatically (that is, with advisory delete disabled), the total amount of ledger data stored should remain at minimum equal to the number of ledger versions the server is configured to keep, with the maximum being roughly twice that many.

Online deletion automatically stops if the server state becomes less than full. If this happens, the server writes a log message with the prefix SHAMapStore::WRN. The server attempts to start online deletion again after the next validated ledger version after becoming fully synced.

For estimates of how much disk space is required to store different amounts of history, see Capacity Planning.

You can use advisory deletion with a scheduled job to trigger automatic deletion based on clock time instead of the number of ledger versions closed. If your server is heavily used, the extra load from online deletion can cause your server to fall behind and temporarily de-sync from the consensus network. If this is the case, you can use advisory deletion and schedule online deletion to happen only during off-peak times. 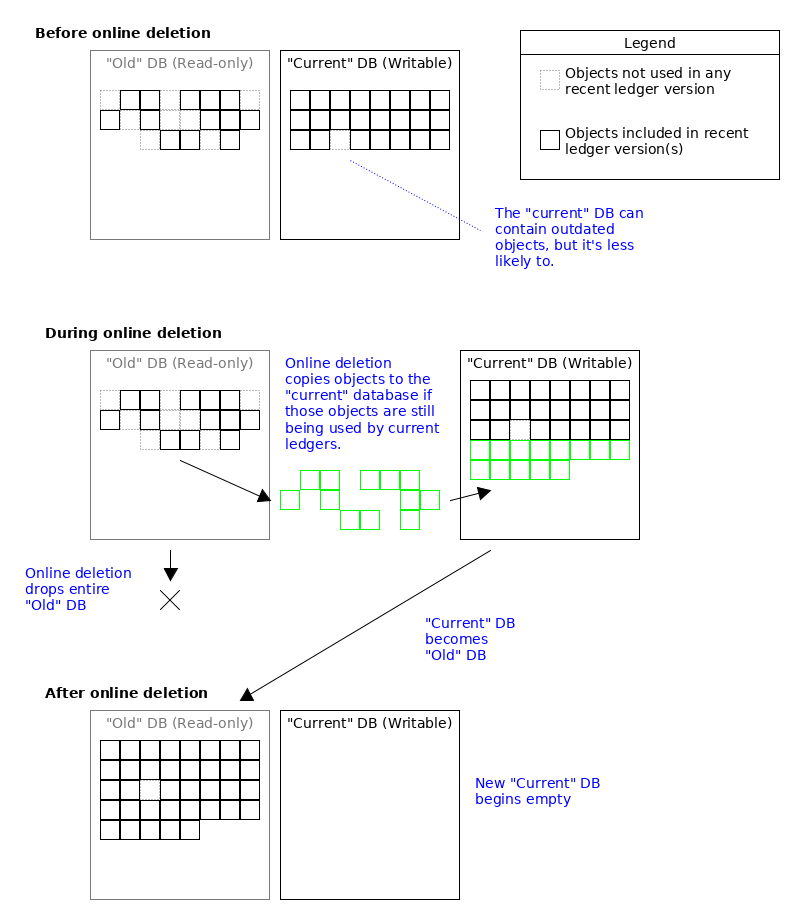